I’ve had time to reflect in the last few days as our leg across the Indian Ocean, through the Persian Gulf and up the Red Sea comes to an end. We have left the intense heat and our experiences – from the contradictions of India to the opulence of Dubai and the history of Petra – behind.

India is a land of contrasts. We stayed in luxury hotels (where the air-conditioning allowed us to cope with the mid-40 degrees heat outside) and visited the ancient sites of Fatehpur Sikri, Agra Fort, Amber Fort and the Taj Mahal, where the grandeur of previous eras was still evident. Nearby the streets are over-crowded and unspeakably squalid. The traffic is to be seen to be believed. I didn’t see a single vehicle that wasn’t dented and scratched but as tuk-tuks squeezed between trucks and in front of buses and motor cycles ran between them all as drivers played dodgems, we didn’t see a single accident or incident of road rage – despite the constant cacophony of horns.

A rickshaw ride around the Old City of Delhi, where the best and worst of the sights, sounds and smells of India invaded our senses, was an eye-opener. The bundles of electric wires hanging from balconies, poles and various other parts of the buildings would have been an electrician’s nightmare – and dangerous, but the people take such danger and such claustrophobic conditions in their stride. It was an experience of a life-time and our visit to the Taj Mahal at dawn was worth every minute of our enlightening, if confronting, whirlwind tour through Delhi, Agra and Jaipur. You can see lots more photos on my Facebook page. 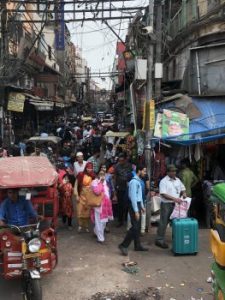 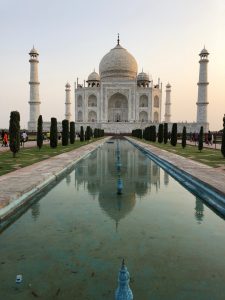 In contrast, man-made Dubai is clean, organised and opulent – and still as hot. They strive to have the largest, longest, tallest and most of anything and everything. Our experiences there varied from a 4WD drive desert safari with belly dancers, camels and a meal under the stars in a Bedouin enclave to a 5-star High Tea on Level 122 of the Burj Khalifa, which is currently the tallest building in the world (164 floors), but they have just started building another, in time for the World Expo in 2020, which will be taller still. 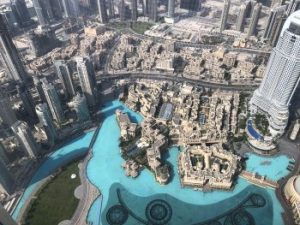 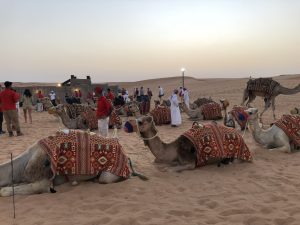 The Lost City of Petra is definitely a ‘wonder of the world’. It is amazing to think of a civilisation, long lost, that could carve such wonderful monuments (from the top down) from the cliffs and rocks. There is roughly only 15% of Petra open to view as they uncover more. My OH excelled himself and conquered the searing heat to climb to the top (some 1300 steps or so we are told) to view the Monastery, although the Treasury, the first building you see as you come through the Siq, is probably the most famous. 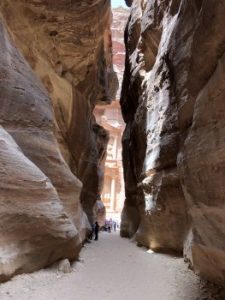 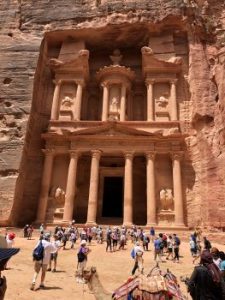 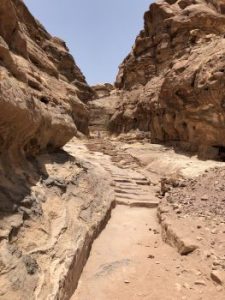 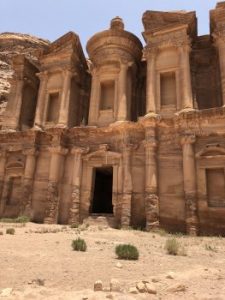 Common to all the places we visited though is the pollution, especially air pollution although plastic is one of the main offenders as far as rubbish is concerned. The desert areas suffer with fine particles of sand lingering in the air which also traps the fumes from the vehicles. Apart from the air pollution, India also appears to have little infrastructure to cope with its polluted water and enormous waste stream. It is sad to see humans doing so much damage to our magnificent world.

My Guest Interview with Maria Grace 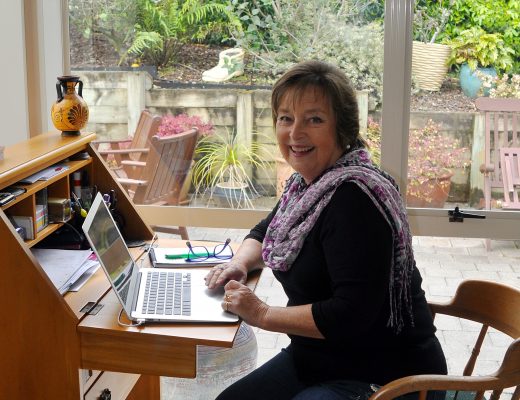